‘I’m supposed to be a minimalist’

Vladimir Kagan’s elegant mid-century furniture has graced the home of Angelina Jolie and Brad Pitt, Tom Ford’s Gucci stores and a Giorgio Armani restaurant in Italy. But the German-born designer’s Upper East Side apartment is a far cry from the “less is more” philosophy that inspires his work.

In the living room, his sculptural chairs and zigzagging green sofa compete for space with a collection of Buddha heads, several large statues, a smattering of plants and candles, an upright piano and a birdcage big enough to hold a man – home to Conrad the canary.

“I’m supposed to be a minimalist – I’m a maximalist. So I say, ‘Do as I say, not as I do,’” the 85-year-old laughs. Today is no exception: he is dressed in a pink striped shirt, red corduroy trousers and crimson braces. His colourful attire fits in with the living room’s vibe: rainbow-hued Haitian paintings and African masks hang on deep green walls with gold-trimmed mouldings, while Mexican animal figurines trot across the mantelpiece. In the dining room, china and glass fills floor-to-ceiling cabinets, while the entryway and halls are dotted with paintings, some by Kagan’s son, Illya, and others from his father’s collection of works by German expressionists. There are also intricately embroidered pillows and textiles by Kagan’s late wife, Erica Wilson, all around the apartment.

At 4,000 square feet, the rambling 10-room property, which Kagan and Wilson bought for $140,000 in 1969, is more than twice the size of a typical Manhattan home, and in a way it feels like two distinct spaces. The front half is a riot of colour, where even a bathroom is wallpapered in a vintage geometric design. Step down a hallway, though, and you’ve entered the pale and airy domain of Kagan’s daughter, Vanessa, her husband and three daughters. There is a large, sunny bedroom, a smaller sitting room and three narrow maids’ rooms off the kitchen, which have become the girls’ bedrooms.

Kagan leads into Vanessa’s sitting room, where we find Vanessa along with the family dog, Toby. A large abstract painting of what look like cherry blossoms, by the Japanese artist James Hiroshi Suzuki, glows softly red against white walls and a beige carpet.

“[Vanessa] would like nothing better than for me to paint [the front half] white,” Kagan says. “The dark looks good in the other room.”

Kagan leans back on a grey, kidney-shaped sofa – one of his own – and points out other designs from his long career. There is a roll-top desk on metal legs from the 1950s and a leather and wood rocker that is both sensuous and simple. Behind an electric guitar is a tall cabinet with a leaf that folds out into a small desk, “typical of what I did in the 1940s, that architectural look”.

Like the rest of the apartment, the sitting room is an archive of Kagan’s creative work over the past seven decades, stretching back to his days as a student at New York’s High School of Industrial Arts.

“I had a lot of exposure to good, modern design,” Kagan says of his early years, and he developed a firm sense of likes and dislikes. Italian furniture was “baroque, over the top, unjustifiable”. Scandinavian designs were appealing, but still “more industrial” than what he preferred.

Inspired by the Bauhaus, he developed a style that emphasised comfort and functionality, epitomised in the very piece he’s sitting on – the Serpentine sofa, designed in 1949 – and his 1947 barrel chair. “A lot of modern furniture was not comfortable. And so comfort is: form follows function; the function was to make it comfortable.”

Kagan also sought to strip down design to its simplest non-decorative form, and he points to the rocker – its sinuous wooden frame characteristic of his 1950s “contour” style – as an example of this ideal. “The joints reflected roots and trees and bones and knuckle. That’s a knuckle there on the arm. I used a lot of human anatomy ... I created what I called vessels for the human body.”

Today, these designs are back in demand with the vogue for mid-century style. “Who knew that I would live to see the day when a sofa of mine would fetch $193,000 at auction?” he mused in a recent blog post.

Even after decades of success, Kagan still seems tickled by the idea that celebrities and design magazines are clamouring for his work. The son of a Russian-born cabinetmaker, who fled Germany with his family on the eve of the second world war, Kagan got an early start in his father’s workshop in New York.

“I was not well suited to being a good cabinetmaker. I was too impatient, impulsive,” he says. “My father always said to me, ‘Vladi, measure three times and cut once.’ And I would cut three times without bothering to measure ... But I was damn good at conceptual ideas.”

A talent for drawing and the encouragement of an attentive teacher pointed him towards architecture, which he went on to study at Columbia University. But Kagan was already making a name for himself in furniture design, and returned to the business after finishing his degree.

He got an early break when he was commissioned to make cocktail furniture for the United Nations’ temporary headquarters in Lake Success, New York, and he went on to work with pioneering industrial designer Raymond Loewy, before opening his own shop in the late 1940s. Kagan’s early clients included Marilyn Monroe and Gary Cooper, and, later on, companies including Monsanto and General Electric.

Today, the soaring prices of his vintage work present a challenge to his latest project: an archive of his pieces at a new showroom in New Jersey. The oldest work is a blue leather and wood dining chair built in 1946 for his parents – the first design he made real.

“Almost all of the interesting work I’ve done over the past, there are no records of it any more,” he says. “It’s not like in architecture – they build mortar and bricks and stone and it becomes a monument. I work in a home, and when people move out, the place gets destroyed. They die and it ends up at auction.”

Though age and health issues have brought an end to his daily runs in nearby Central Park, Kagan has no shortage of energy. Reproductions of his classic styles are for sale at a growing number of US showrooms, he does bespoke work for individual clients, he writes lively posts about his work and family for his blog, and he is working with interior designer Amy Lau on $150,000 worth of furniture for a new showroom in Saudi Arabia. “We are expanding, at a time when retirement isn’t an unappealing thing,” he says. “It’s keeping me very busy and I think it’s very healthy.”

There is also the travel – already this year he has been to France for the Maison & Objet interiors show, and to Palm Beach and Disney World with his grandchildren. This summer he will spend driving his Model T car around Nantucket, where his family has spent vacations for decades.

Kagan approaches it all with optimism and humour. He joked on his blog about his “mission” at Maison & Object: “To be the ‘trophy’ for visitors from all corners of the world to cluster around and chat with me and have their picture taken with an ‘icon’.”

Even at Disney World, he ran into another moment in his long career history: the Carousel of Progress, an exhibit originally designed for the General Electric pavilion at the 1964 World’s Fair, which Kagan helped to research. The final product bore little resemblance to his design, he says, but the experience stuck with him.

“There’s nothing I ever learnt in school or any place that hasn’t come to be useful,” he says. “Nothing has ever been wasted.”

Favourite thing
A chess set in Kagan’s study was hand-carved by his father, who turned to sculpture in later life after retiring from the cabinet shop. “He loved playing chess,” says Kagan, looking over the chunky, geometric pieces and recalling hours spent on the other side of the board. Other pieces by the elder Kagan are lined up on a shelf near his desk, and two large sculptures take pride of place in the living room – next to the fruit of his son’s labours. 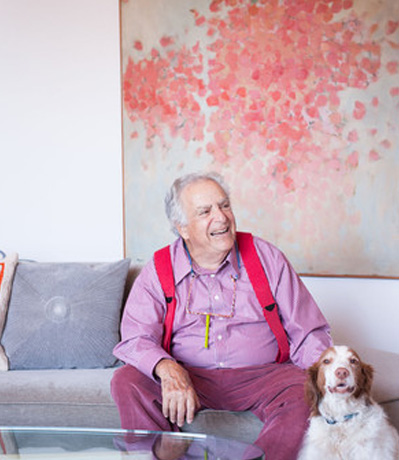 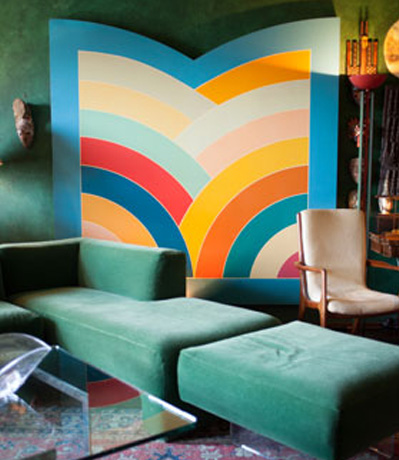 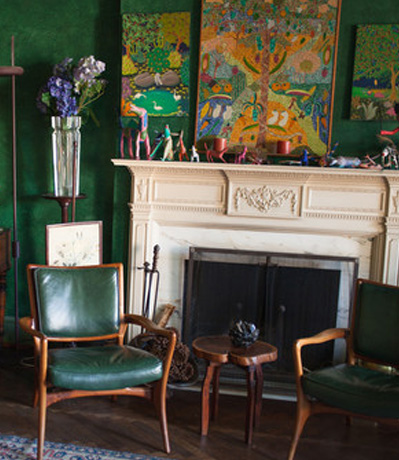 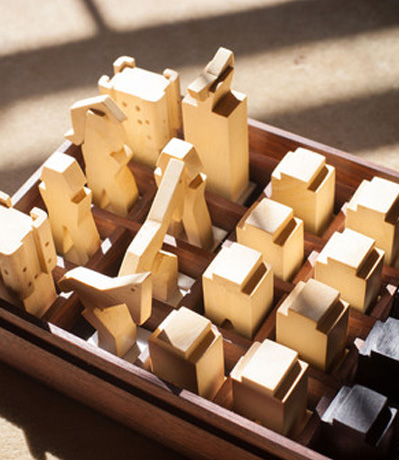