When Chad Leat was considering whether to buy a full-floor apartment in one of architect Richard Meier’s sleek glass towers in Manhattan’s West Village, he was excited and terrified in equal measure. “The great attraction was the Hudson River view and the fact that it was raw space, so we could create something from scratch,” says Leat, an investment banker and philanthropic fundraiser. But it was also counterintuitive for a lover of contemporary art to acquire a home without walls for hanging his collection—so he consulted with architect Preston T. Phillips before making a bid, to see what might be done. “I asked Preston, ‘Is it possible to find a way not to mess with the apartment and yet still show my art?’” Leat recalls. “I wanted to keep it open and loftlike, because I am more of a casual kind of guy.”

Phillips, who is based in Bridgehampton, New York, had worked with Leat on four previous projects and was part of the original loft design movement of the 1970s; he obliged with a floor plan that showcases art and views simultaneously. When you step off the elevator into the space, you now face a dramatic 40-foot-long entrance gallery lined with paintings and works on paper—a runway of sorts that leads to the main living area, with its curtain wall framing vistas up, down, and across the river. “The gallery became the spine of the apartment,” explains Phillips, who also carved out a master bedroom suite on one side of the gallery and a high-performance open kitchen and a library/guest room on the other.

Once the layout was established, Leat and Phillips began collaborating with Manhattan-based interior designers Randy Kemper and Tony Ingrao on finishes, furnishings, and window treatments. “There weren’t going to be that many elements in the apartment, so every surface became extremely important,” says Kemper, who notes that 16 coats of white lacquer were applied to the walls until they were as luminescent as the vitreous snow-white floors of the gallery and kitchen. “We wanted to maintain that feeling of a downtown loft, but make it really luxurious and elegant. All the furniture is floating, so you can take in everything at once. The arrangement isn’t aimed at one view, because the views are everywhere.”

He is not exaggerating. In fact, the choice of window treatments was critical—the space is a fishbowl, literally walled with glass and visible to neighbors from three directions. (Meier’s original design for the apartments specified solar shades that disappear into the ceiling, but they are translucent and purely utilitarian.) Both Phillips and Kemper independently came up with the same solution: beaded-aluminum curtains, inspired by the ones Philip Johnson designed for the landmark Four Seasons restaurant in Mies van der Rohe’s Seagram Building, that would wrap the perimeter on all three sides, creating a veil of privacy and filtering, but not obstructing, the light. “The metal curtains work with the International Style architecture of the building,” Leat observes.

While architect and designers conceived the apartment to accommodate large-scale entertaining, they also wanted their client to feel cosseted when he was home alone. “The trick in these spaces is to create moments of intimacy so the place doesn’t feel like a stage set,” Kemper says. By positioning a pair of curved Vladimir Kagan sofas and a biomorphic polished-steel cocktail table by Ron Arad on a round goatskin rug, Kemper and Ingrao fashioned a vignette in the living area that is contained yet fluid; it appears to revolve within the larger surroundings. The seating group overlooking the river at the end of the “runway” is another iteration of the cohesive/ethereal dialectic. It features two magnificent 1968 sofas by Charles Hollis Jones, one of the pioneers of Lucite furniture. “The bases light up at night and you have the illusion that the sofas are floating in the air,” Kemper explains. 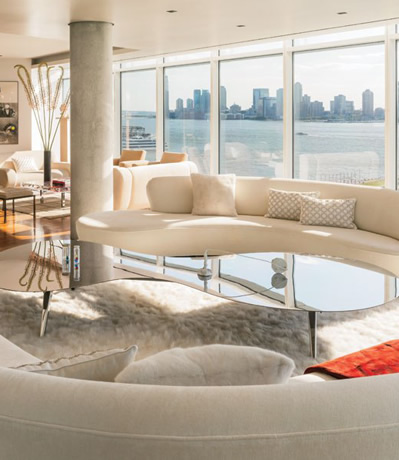 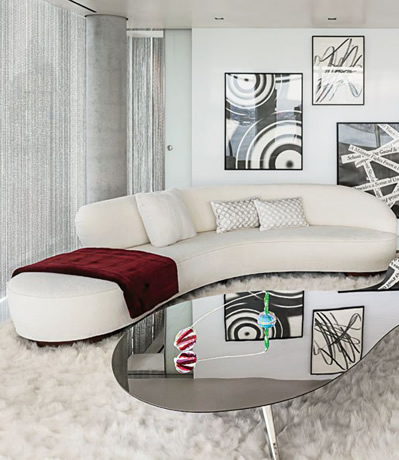